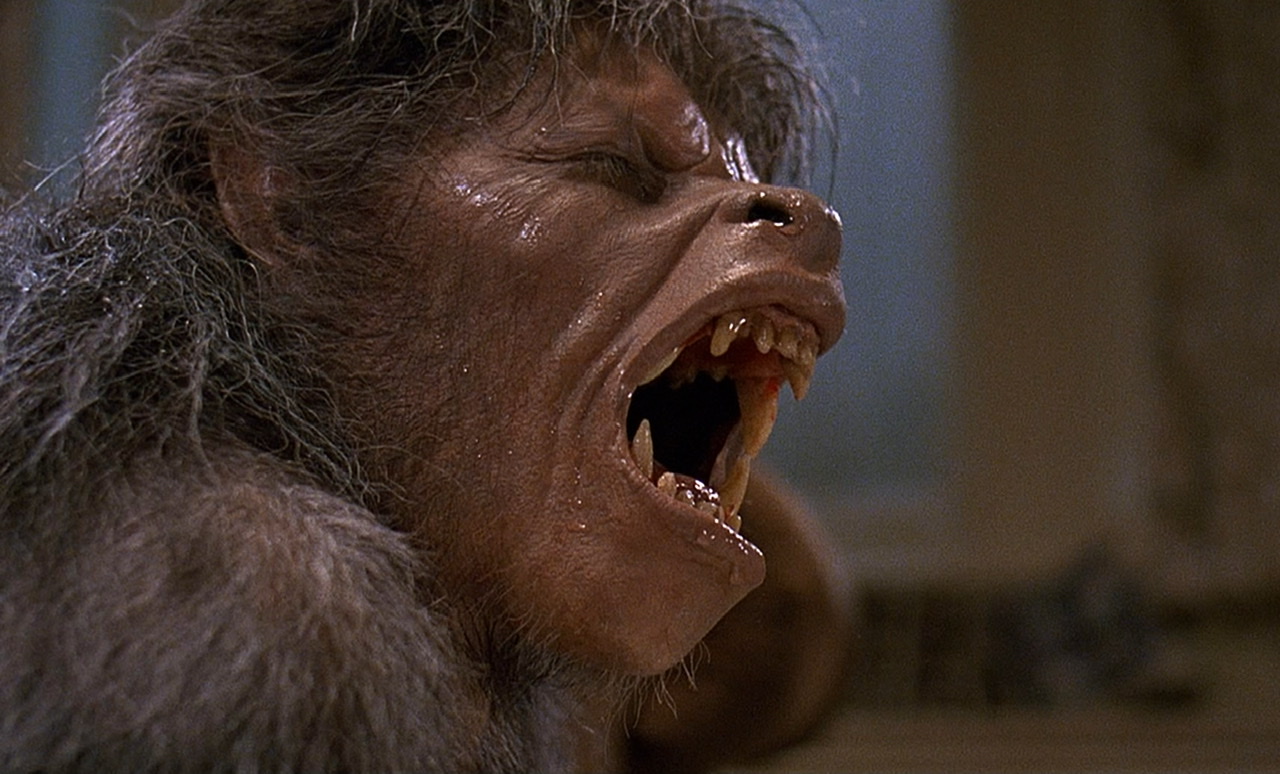 It may be 2020, but the 1980s are alive and well. Neon lights and retro logos are in, synths and new wave are ascendant, and pop culture is saturated with nostalgia for the shows, films, and franchises of the decade.

Now, any celebration of 80’s culture would be incomplete if we left out the incontrovertible truth that the decade was the golden age of practical effects in horror. The era was hugely significant for the genre because of the other incontrovertible truth, practical horror effects are vastly superior to their CGI counterparts. This is known.

Seriously, you go find all the outdated CGI that’s still scary, and I’ll go find all the old practical effects that are still horrifying, and we’ll compare lists. It would be a fun exercise, because after you can’t find any examples we can just watch 80’s horror movies all night.

On second thought, let’s not waste time, and instead skip right to the part where we watch 80’s horror. Here are five movies from the golden age of practical horror effects you should watch this Halloween.

Okayokayokay, I know, Alien came out in 1979, but I’m including it because, a) it’s a brilliant movie with terrifying practical effects, b) it’s part of the dawn of the golden age, and it transitions out of the 70s, a decade with amazing practical effects in its own right that set the tone for what was to come, c) I can do what I want.

Obviously, the chestburster scene is one of the most iconic moments in film history, but it doesn’t end there. All of the physical realizations of H.R. Giger’s disturbing artwork of phallic alien monstrosities are scary as hell. Alien is the precursor to a decade that would use practical effects to give us monsters that still haunt our nightmares in 2020.

The Thing is an all-timer, featuring one of my favorite final scenes, ever.

John Carpenter effectively immerses you in the horror and paranoia of being trapped in the middle of Antarctica with a monster who can look like anyone. A monster who just so happens to be hellbent on killing and assimilating you and whichever of your friends are still actually your friends. Even worse, it will then use your likeness to get back to civilization and murder the whole planet.

As great as the concept is, the deep psychological horror is rooted in how terrifying the Thing itself is to behold. Without Rob Bottin’s remarkable effects, the movie would likely have fallen flat and become another example of a potentially great sci-fi horror film ruined by visual inadequacies and limitations. Instead, Bottin and his team delivered one of the most horrifying monsters ever committed to screen.

In the case for the supremacy of practical effects, The Thing is Exhibit A.

Not so fun fact: Bottin worked so hard that he ended up in the hospital from exhaustion at the close of filming.

An American Werewolf in London

If you ever come across a list of great practical effects in film that leaves off John Landis’s 1981 horror-comedy, throw it right in the trash.

An American Werewolf in London features the undisputed greatest werewolf transformation scene of all time. Almost four decades later, with huge leaps forward in what can be rendered onto our screens, and no one else has even come close.

He’s the master of body horror, so David Cronenberg’s entire filmography is a cornucopia of disturbing practical effects. Videodrome and Scanners are notable mainstays on ‘best of’ lists, but for my money, The Fly reigns supreme.

It’s overflowing with disgusting practical effects, with each gross-out scene topped just moments later by something even more horrifying. But what I love most is that it’s all used to tell a focused, tragic, character-driven story of a man’s transformation into a monster.

Bonus: we’re living in the midst of a glorious Jeff Goldblum renaissance, so whether you’d be revisiting The Fly or experiencing it for the first time, now is a great time to watch one of his absolute best performances.

Practical effects aren’t just superior in films aiming to shock viewers for genuine scares. They’re also best when it comes to horror more interested in being darkly silly and ridiculous with its gore, and there is absolutely no better example than the Evil Dead films.

These movies are so over-the-top, so delightfully and unrelentingly insane, and the practical effects are what make the whole thing work. CGI never could have done justice to the vile, unholy magic of the Necronomicon Ex-Mortis

It should also be noted that Bruce Campbell is the human embodiment of practical effects. The world would be a sadder place if it didn’t have Ash Williams in it.

Okay, this one isn’t an 80s movie, but if we’re going to talk about practical effects creating absurdly gory slapstick, we have to mention the bloodiest practical horror film of all time: Braindead (released as Dead Alive in the US).

Before Peter Jackson became internationally famous for adapting The Lord of the Rings, he made The Frighteners with Michael J. Fox, an underrated bit of genre fare that would fit right into any Halloween Movie Fest.

But before that, he made one of the dumbest, goofiest, weirdest, most ludicrously over-the-top gross-out gore-fests of all time. Try to imagine what that would look like and you still wouldn’t be close. Forget the same ballpark, you wouldn’t even be in the same galaxy.

Anyway, the film reportedly used 80 gallons of fake blood, making it objectively the bloodiest movie of all time. The lawnmower scene alone makes that easy to believe.

My sweet, sweet Halloween Movie Fest. How I’ve missed you. You were once an annual rite of fall, but I’ve left you neglected. I’ve watched the films, but left their glories unsung. It’s an injustice I can’t let stand any longer. This year, if you’ll have me, I return to your cold, dead embrace.

That’s right, my friends, for the first time since 2017, Halloween Movie Fest returns – and it’s going to look a lot different than ever before! After so many years, HMF grew stale, maybe even a bit boring. It lacked the life it once had – and not in a fun, undead way – so this year I’m bringing an entirely new format to the proceedings.

I started Halloween Movie Fest in 2009 because I wanted to remedy my lack of experience with horror films. I was a scaredy-cat, which is fine, but as a self-proclaimed film super-fan (#99), I was missing out on far too much – including some of the consensus greatest films ever made! So, I decided to watch 11 horror (and horror-ish) movies in 11 days. I loved it, and it did exactly what I’d hoped, lighting a spark of appreciation for horror that would grow considerably in the years that followed.

I’ve tried to hold to that same spirit since. I always begin HMF the way I did that first year, doing research to curate a list of films I’d be watching for the first time (a list which is always supplemented by returning favorites). The goal was to find new films to love, and to share them with you; taking myself into weird, dark, interesting, and underappreciated corners of the film landscape. I wanted to go places I’d never have gone otherwise. And it’s worked. I’ve seen so many great movies I never would have seen, and gone down rabbit holes I never would’ve discovered. I saw for myself how great horror can be, and it totally changed my viewing habits year-round.

This year, instead of researching and curating a single month-ish long list of films for me to watch, I’m going to curate a bunch of smaller lists instead. My hope is you can use them to do a Halloween Movie Fest of your own. It feels like a fitting way to enjoy the fruits of my labor (of love), and to share that with you. I would’ve loved to have these lists back in 2009, so maybe someone out there wants them in 2020.

There will be all sorts of lists, and each one will have a theme, i.e. ‘Five Horror Fairytales,’ ‘Horror Films for Trump’s America,’ etc. I’ll even do a ‘Halloween Movie Fest for Scaredy Cats,’ for the horror-phobic folks out there.

Anyway, I hope the lists bring you as much enjoyment as making them has brought me.